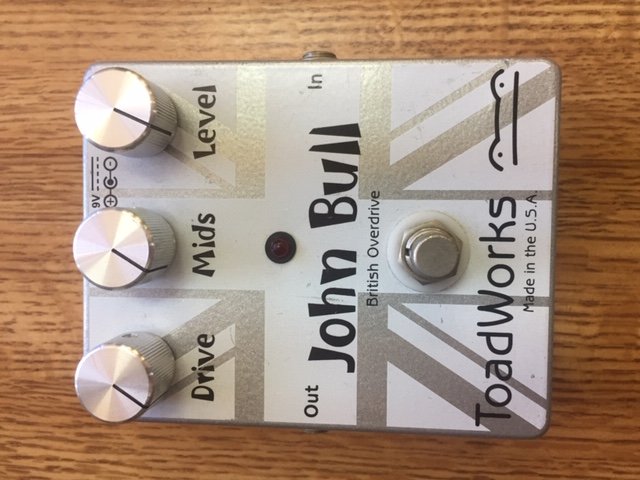 
Here is some info from the web: (please check for accuracy)

The ToadWorks John Bull is a new guitar effect pedal that emulates the classic overdrive that put Great Britain on the rock & roll map. From the 60's to the 00's, England has produced some of the finest amplifiers on the planet. This is the sound that propelled rock & roll to the global force it is today, and now it's under your thumb, ready to conquer the world all over again. John Bull has been tested and used with a wide range of amplifiers, including tube, solid state and hybrid. If classic British overdrive is your cup of tea, John Bull's gonna squeeze your lemon so hard it will hurt.

Every combination of guitar and amp will have a slightly different eq, output, etc., and the sound will always vary to some degree, so expect the unexpected. Whether you are looking for Top of the Pops jangle, high-voltage crunch or creamy Woman Tone, John Bull lays the g-spot right at your fingertips.

Every once in a while a piece of gear comes along that makes you think twice about your current rig. John Bull is that pedal. Whatever your preferred flavor of british amp, John Bull will get you within shouting distance. Low gain, high gain, fat mids or scooped, John Bull does it all and then some.

Like a pint in your favorite pub, sometimes it's smooth, and sometime it's not, but it's always tasty. From 60's pop to 80's rock to 00's thrash, John Bull bites like a bulldog on the old John Thomas. All the sounds in the empire are at your command - just plug it in, crank it up, and Bob's your uncle.

John Bull is hand wired, by people, not machines. From our high quality 3PDT switches to the custom made machined aluminum knobs, every component is the finest available, making ToadWorks Pedals the most well-built and reliable effect pedals in the world.

ToadWorks John Bull is an op-amp based overdrive effect, featuring a unique combination of symetric and asymetric gain circuits. Increasing the Gain control actually changes the character of the overdrive, not just the amount of it. The Mids control spans the decades with one smooth sweep, making John Bull the perfect marriage of versatility and affordability since... well, since the beginning.

The switch turns the effect on and off, the left most knob ("Gain") controls the amount of overdrive present in the signal, the middle knob ("Mids") changes the midrange frequency response, and the far-right knob controls the overall signal level. Click here for the product manual.

John Bull features a true-bypass circuit, so your bypassed tone stays as clear as an un-mudded lake, as clear as an azure sky in deepest summer - when it comes to tone preservation, you can rely on us! Each pedal is carefully manufactured by hand, using only the finest components. The box is custom made to ToadWorks specifications, the switch is the highest quality 3PDT we could find, the jacks are Switchcraft. The knobs are solid machined aluminum, custom made specifically for ToadWorks. Capacitors are a mix of mylar & electrolytic, resistors are a mix of carbon and metal film, transistors are silicon - none of these decisions was made based on cost, they were made purely for sound and reliability.

ToadWorks pedals are proudly made right in the good ol' USA.